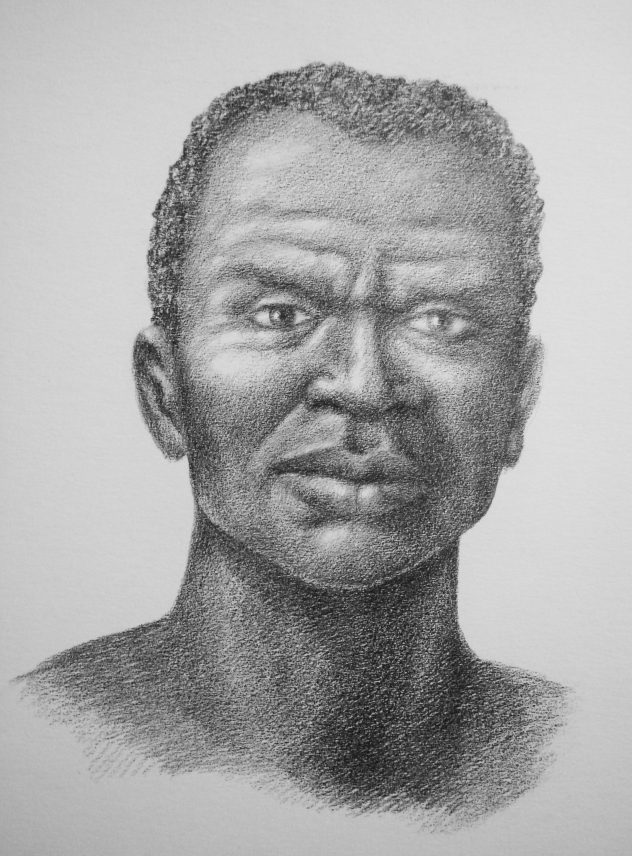 The story of the man who was to become known as Zumbi starts when an expedition led by Bras da Rocha, attacks Palmares in 1655, taking with them a newly born child, amongst the captured. The child was given to a chief who then decided to give the child as a gift to father Antonio Melo, from Porto Calvo. Father Antonio gave the child the name Francisco. Francisco was small and weak. He learnt to pray and became a helper in the church. He learnt Portuguese, latin and religion.

In 1670, when Francisco was 15 years old, he ran away to the quilombo where he was born, changing his name to Zumbi which in Banto dialect means ‘master of war’. Zumbi (zombie in English) meant ‘living dead’ or ‘being alive after death’ in other places.

It didn’t take too long before he was elected chief of a mocambo village and because of his fierce personality he became general commander of the Palmares army.

Zumbi started to be idolised when, contrary to Ganga Zumba, he didn’t  accept the false peace deal proposed by the government. Zumbi, with the help of his comrades, brought Ganga Zumba down and took over the leadership of the quilombo de Palmares.

Zumbi re-organised the whole quilombo. He ordered that all of Ganga Zumba’s followers have their throats slit, he killed all his internal enemies, prepared his men for future combat and transformed Macaco, capital of Palmares, into a giant fortress. For 17 years while Zumbi ruled as a commander, Palmares won all battles. During this time, the government and the crown tried to negotiate an understanding between them, which would guarantee Zumbi himself and his family’s safety if he were to surrender. Zumbi preferred to fight rather than give up on his cause: there could be no price for his dignity.

Zumbi dos Palmares is a symbol of resistance and domination. He is a reference point for the Africans brought to Brazil and all their descendants.

They believed, in the senzalas, that Zumbi was immortal. But the last battle was close and on the 20th of November 1695, a year after the Palmares defeat, the Master of War died in an ambush. Betrayed by a colleague from Palmares, he was stabbed, shot and mutilated. Having his penis cut off and thrust into his mouth. He was a short, skinny and crippled man, very different from the image we had of him. His body was recognised by father Antonio Melo. The violence against him didn’t stop. His head was cut off, put in salt and then sent to Recife, in order to show that Zumbi wasn’t immortal. But this wasn’t enough to impede the myth of Zumbi to encourage others to continue fighting against slavery. Black-conscious day is celebrated on the day Zumbi died, on the 20th of November.

Zumbi will live as a lesson of resistance. His legacy will permanently exist as a symbol of the endless atrocities of a limitless power. Above all, Zumbi’s legacy will serve as an example for those fighting against oppression and looking forward to freedom and justice.