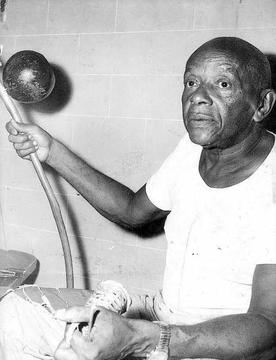 Manuel dos Reis Machado was born on the 23rd of November 1900, in Engenho Velho, Freguesia das Brotas, Salvador, Bahia, Brazil. He got his nickname soon after he had been born due to a bet between his mother, Maria Martinha do Bonfim, and the midwife who helped to bring him to life.

His father, Luis Candido Machado, was a known ‘batuqueiro’, a champion.

‘In 1918 there wasn’t any capoeira school. There used to be ‘rodas de capoeira’, on

street-corners, in the warehouses, in the woods.´

In 1928 he thought that the capoeira he practised was not very competitive as a martial art, so he included some other kicks to ‘capoeira Angola’ and created ‘capoeira regional’.

‘I invented regional capoeira. While I was studying and practising Angola, I invented and perfected some new movements. In 1928, I invented, the regional form which is basically ‘batuque’ mixed with Angola and some additional movements, a real fight, good for the body and for the mind.’

The Regional Capoeira invented by mestre Bimba was polemic topic amongst other capoeiristas who didn’t agree with this radical change. On the other hand, the newspapers and magazines were happy to publish all of his skills. Mestre Bimba and his Regional Capoeira became famous throughout Brazil.

In 1932, he opened his first school with the name “Centro de Cultura Física e Regional”. Five years later, in 1937, was recognized and registered by the government.

In 1939, Bimba taught Regional Capoeira at CPOR headquarters. He opened his second school in 1942.

Bimba spread the word of capoeira in many exhibitions all over Brazil and in the 23 July 1953, he made a presentation to President Getulio Vargas, at Aclamação Palace, in Salvador. While shaking hands with Mestre Bimba, the president said:

‘Capoeira is the only real Brazilian sport.’

It was because of this meeting with Bimba that President Getulio Vargas opened the doors to popular demonstrations of capoeira, which were persecuted and prohibited before. This was of great benefit to capoeira as it was no longer forbidden by the police.

Being married, and a father of 10, Bimba had financial difficulties. He believed that he would be recognised one day for his work and his life would improve. For this reason he left Salvador and went to Goiania. His life in Goiania, however, was not as promised. A year later, on the 5th of February 1974, Mestre Bimba died.

‘The man who elevated capoeira to a better level, who ‘took it from under the ox’s feet’ (as he used to say), and introduced it to the universities and the society of Salvador, who was mentioned in encyclopaedias and who was filmed by tourists from all over the world.´

Buried in Goiania, his remains were taken to Salvador on the 20th  July 1978.

´Bimba is gone but left his majesty, his unique work which, like him, became immortal, leaving his philosophy and strength to make a strong and authentic capoeira, proudly called Regional, the Brazilian martial art.´