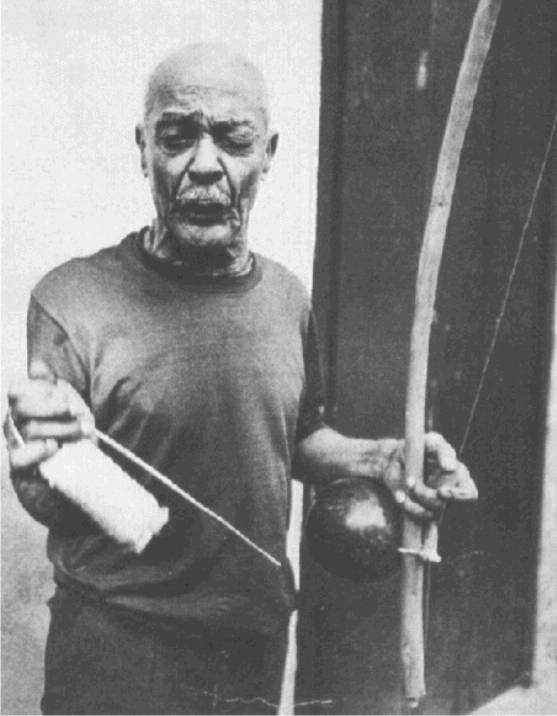 Vicente Ferreira Pastinha was Born in Salvador on the 5th of April 1889, so

n of a Spanish father Jose Senor Pastinha and Black mother Raimunda dos Santos. When he was ten years old, Black Benedito, a freed slave called him to teach him about the secrets of this art, with which he could defend himself against a taller and stronger boy that was always threatening him. He then started to practise capoeira at Uncle Benedito’s  ‘canzuá’  on Rua da Laranjeiras. Not too long after, he would be considered ready by his ‘Mestre’ and went on to strengthen his reputation of being unbeatable on the hills of the city.

After having tried many jobs, including the marines, Pastinha never forgot capoeira and in 1935, when he was 46 years old, he started his own school in a place known as Bigode, close to Pelourinho.

After a few years, in 1941, he changed the address of his school, called ´Centro Esportivo de Capoeira Angola´,  to ´casarao n 19´, in Pelourinho. It was there where Mestre Pastinha taught capoeira and gave presentations to many tourists from all over the world.

In 1964 he wrote a book called ´Capoeira Angola´. His friend Jorge Amado wrote the foreword of the book. Pastinha showed his work with capoeira throughout Brazil and represented his country in the first black arts festival in Dakar, Africa, in 1966.

Already famous in Brazil and abroad, in 1973, when he was 84 years old, Pastinha’s school was appropriated by the ‘National Heritage Foundation’ and turned into a restaurant.

Pastinha suffered greatly from this situation.  His wife, Maria Romelia Costa Oliveira, Dona Nice, took care of him until the very end, earning money by selling ‘acarajes’ on the streets. Some of his disciples and friends helped him, like Jorge Amado, who convinced the government to give him a 3 minimum-wage salary.

Pastinha suffered a first stroke in May 1978, and a month later, the second one. He was transferred to D.Pedro II and died on the 13th of November 1981 of a heart attack. During the funeral ceremony, the berimbau played for his final sleep.

‘A capoeirista must be calm. Calmness allows the capoeirista to defend himself or to attack with more knowledge and cunning.’

‘A capoeirista has to be loyal, has to respect his comrades and has to follow the rules of capoeira  blindly.’

‘We can’t forget the berimbau. The berimbau is the primitive master. It teaches through its sound. It gives vibration and ‘ginga’ to our body. The inclusion of the berimbau in percussion is not a modern thing, it’s a matter of principles. A good capoeirista, besides playing good capoeira, has to be able to play berimbau and sing.´

´Nobody can show everything they have. The revelation has to be done step by step. This applies to capoeira, to family or in life in general. There are secrets that can’t be revealed to all people. Some moments cannot be shared.´

´The slaves saw in capoeira a way of defending their freedom. However, lowlifes found in capoeira, a way to rob people, reap vengeance on their enemies and fight the police. It was a sad time in the history of capoeira. I know, I’ve seen it happening, in the port, violent fights, nobody could stop them. I know this will be a bad chapter in history of capoeira. And the bombs ? Capoeira Angola is like a dance, but it isn’t.  It can kill, it already has. Beautiful ! Its beauty contains the violence.´

‘Angola, mother capoeira. Slave’s ‘mandinga’ in angst of freedom. Its principle has no method, its end is inconceivable to the most wise of capoeiristas.’

‘Capoeira is ‘mandinga’, it’s ‘manha’, it’s malicious, it’s everything a mouth can eat.’

’I practise the real capoeira Angola and here men learn to be loyal and fair. The Angolan law that I inherited from my grandparents is the loyalty law. The Capoeira Angola that I learnt, I haven’t let  change here at the school. My disciples care for me. Their eyes are now my eyes.’